The Port of Chittagong (Bengali: চট্টগ্রাম বন্দর) is the busiest seaport on the coastline of the Bay of Bengal, and the second busiest in the overall region of countries dependent on the Bay of Bengal. According to Lloyd’s, it ranked as the 71st busiest port in the world in 2017  Located in the Bangladeshi port city of Chittagong and on the banks of the Karnaphuli River, the port of Chittagong handles 90% of Bangladesh’s export-import trade, and has been used by India, Nepal and Bhutan for transshipment.

Congestion is a major challenge in Chittagong port. The port had a congestion rate of 84.3 hours between January and July in 2017. 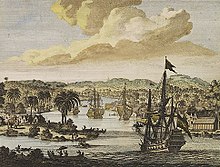 Dutch ships visiting Chittagong during the Mughal period in 1702

The Chittagong area has been a recorded seaport since the 4th century BCE. In the 2nd century, the harbor appeared on Ptolemy’s map, drawn by the Greco-Roman cartographer Claudius Ptolemy. The map mentions the harbor as one of the finest in the Eastern world. The Periplus of the Erythraean Sea documents trade between Chittagong and private merchants from Roman Egypt.

Arab traders frequented Chittagong since the 9th century. In 1154, Al-Idrisinoted that merchants from Baghdad and Basra regularly traveled to Chittagong. Arab traders played an important role in spreading Islam in the region. The port appears in the travelogues of Chinese explorers Xuanzang and Ma Huan. The Moroccan explorer Ibn Battuta and the Venetian traveler Niccolo De Conti visited the port in the 14th century. The historical port had ship trade with Africa, Europe, China and Southeast Asia.

The Portuguese settlement in Chittagong centered on the port in the 16th and 17th centuries. After the Portuguese were expelled, Chittagong came under the rule of the Mughal Empire and was named Islamabad. It became an important shipbuilding center, catering to the Mughal and Ottoman navies. After the rise of British dominance in Bengal following the Battle of Plassey, the Nawab of Bengal ceded the port to the British East India Company in 1760. 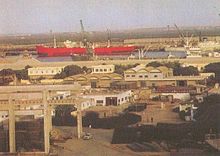 The modern Chittagong port was organized in 1887 under the Port Commissioners Act in the British Indian Empire. The port began formal operations under a commissioner in 1888. Its busiest trade links were with British Burma, including the ports of Akyab and Rangoon; and other Bengali ports, including Calcutta, Dhaka and Narayanganj. In the year 1889–90 the port handled exports totalling 125,000 tons. The Strand Road was built beside the harbour. Between 1905-1911, Chittagong was the chief seaport of Eastern Bengal and Assam. It was made the terminus of the Assam Bengal Railway. Hence, the port’s hinterland included all of colonial Assam (modern Northeast India). Trade between British India and British Burma rapidly increased in the early 20th century. The Bay of Bengal became one of the busiest shipping hubs in the world, rivaling the traffic of ports on the Atlantic. In 1928, the British government declared Chittagong as a “Major Port” of British India. Chittagong was important for the petroleum industry that developed in Assam and Burma. It was used for jute and rice trading. During World War II, Chittagong port was used by Allied Forces in the Burma Campaign.

After the partition of British India, the governor-general of the Dominion of Pakistan, Muhammad Ali Jinnah, visited Chittagong and stressed its importance and future potential. The Chittagong Port Trust was formed in East Pakistan in 1960. 100 employees of the Chittagong Port were killed during the Bangladesh Liberation War in 1971. The Soviet Pacific Fleet was tasked with mine-clearing and salvage operations in the port after the war. The port has benefited from the growth of heavy industry and logistics in the Chittagong Metropolitan Area in the years following independence. Trade unionism was strong in the late 1990s.

A major expansion took place with the construction of the New Mooring Terminal in the first decade of the 21st century.